Our Blog | Advice on In Ground Swimming Pool Construction and Maintenance

Ozone: Should you use it in your swimming pool? 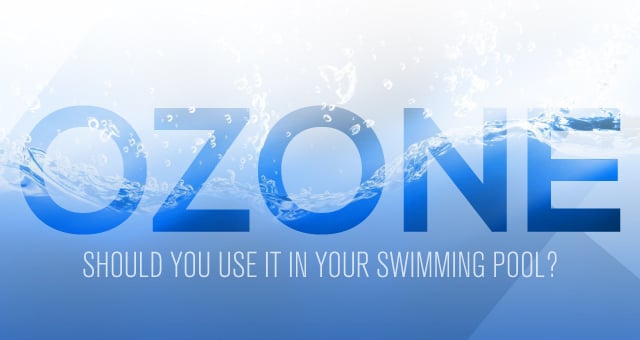 Recently we shared with you about chlorine generators (also known as salt water pools). We told you how they work, what people love about them and what the drawbacks are. If you missed that article you can read it here. Today we have another type of system to share with you, one that is a little less well known – Ozonators.

These systems, as you probably guessed, generate ozone. Using an ozonator in your pool can result in:

1. A lower level of chlorine needed

2. An absence of irritating chloramines

4. Water that is bright and clear

As with all systems though, there are also disadvantages, but before we get into those let's talk about what ozone is and how ozonators work.

Ozone molecules are three oxygen atoms stuck together (O3). Normal oxygen in the atmosphere is two oxygen atoms (O2). While there is ozone in the air around us it is fairly uncommon. Natural generation of ozone can occur during a lightning storm and gives the air that fresh, clean smell that follows the storm.

So why use ozone in your swimming pool? Ozone is a very strong oxidizer, much stronger than chlorine. An oxidizer is a compound that burns something up very slowly. For example, a leaf that has fallen in a chlorine pool will be oxidized after just a few days, and the leaf will be almost completely consumed by the chlorine. Even though ozone is not an oxidizer and sanitizer like chlorine, it is such a strong oxidizer that it basically accomplishes the same thing. When ozone comes in contact with particles in the water (algae, viruses, bacteria etc.) the 3rd loosely attached oxygen molecule breaks free and attaches to the particle, which is then destroyed.

How is ozone made?

Now that you know what it is, here's how it is made. There are two basic types of ozone generators:

CD – Uses something called corona discharge to create ozone (this is electricity, like in a thunderstorm)

Both methods serve the same purpose, which is splitting up O2 molecules and recombining them to make O3 (ozone). The CD systems are advertised to make much more ozone than the UV systems which appear to be on their way out. After the ozone is made, it is sucked through a low pressure point in the jet where it is mixed thoroughly with the pool water.

What are the disadvantages?

The biggest drawback to ozone also happens to be it's greatest strength: it is highly reactive and volatile. It is quick to attach to, and destroy all types of things that may be living in your pool water. Because it is so quick at what it does, it also isn't around very long. The system has to run almost constantly because there is no ozone left in the water soon after it stops. It completely dissipates. This leads us to another problem. It you have an algae colony growing on the opposite side of your pool, chances are the ozone will never make it there. The ozone is almost completely consumed shortly after it makes its way out of the jet, if not before. The solution is simple though. A small amount of chlorine, like what is introduced through a floating tablet is enough to keep the algae growth at bay.

So why use an ozone system at all?

Why not just use chlorine? To keep it simple, when chlorine is introduced into the pool it creates two types of compounds. The proportions of each is determined by the pH level. One of these two compounds forms chloramines when it is combined with sweat, makeup, sunscreen, body oils etc. The chloramine, as we've stated previously, is responsible for skin and eye irritation and the “chlorine” smell. Since ozone is such a powerful oxidizer all of the chloramines present are quickly oxidized.

In conclusion, ozone generators are not an end to your swimming pool maintenance. You'll still have to test your water on a regular basis, and do the standard cleaning. You will have less chemicals to buy though, and dramatically lower levels of chlorine. You will also have a pool that is chloramine free with brighter crisper looking water.

If your interested in talking about or converting to saltwater, ozonation or even traditional chlorine systems, give us a call at (501) 664-6861. We would be happy to provide you with the information you will need to make an informed decision.